Performance, level of friction, and durability are just a few of the important factors one must consider when looking for the best indoor soccer shoes. Every person has different needs for their shoes, but there are some universal qualities that we all desire. That being said, indoor soccer shoes are in contrast of a normal pair of sneakers because they are designed with more athleticism and versatility in mind. They demand an alternate kind of tread because the surfaces they are used on result in added stress to the sole. While traditional sneakers are more utilitarian in their uses and construction, soccer ‘boots’ are very nuanced and specific in their assembly.

Not keen on reading? Click to see best selling indoor soccer shoes from Amazon
SaleBestseller No. 1 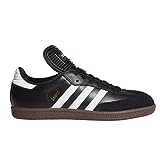 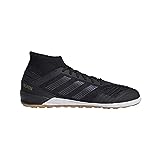 Even though futsal shoes are obviously different than traditional  soccer shoes and even turf soccer shoes due to the fact that there are no cleats (studs) on the bottom, the other factors that contribute to a great piece of soccer footwear remain relatively identical. Of course when playing futsal you don’t have to worry about your shoes being waterproof. The constitution to a great shoe is: allowing wearer of the shoe the maximum amount of support needed while being able to harness extreme control and autonomy during movement – just the right amount of traction is needed. Because performance weighs so heavily in a competitive environment, it is vital to find the shoe that allows a player’s talents to fully flourish.

The Adidas Performance Men’s Samba Classic Indoor Soccer Shoe, or just the Sambas, marries one of the most popular brands on the market with an unmistakable style, resembling the evergreen classic Adidas Copa Mundial football cleats. Outsoles are what make a shoe stick effectively to the floor, and the non-marking gum rubber on the Samba provides stellar grip on indoor floors and surfaces. Imported and offering full grain leather upper, this traditional Adidas look is aesthetically pleasing to the eye while being reliable in clinging to the ground with ease. The die-cut EVA insole is designed to be light in weight to encourage maximum comfort. The Samba Classics are available in both black and white color schemes and serve as sort of a ‘jack of all trades’ for athletic shoes. Its swiss army knife type of capabilities are found in not only the floor-stick, but also the life of the shoe.

The Sambas are known for their longevity – people also use them outside the soccer fields. Even after years of daily use the construction, stitching and uppers remain virtually flawless. There is another version of Sambas without the indoor soccer shoe label, they have some details done differently but you could also use the indoor ones outside while being ever so fashionable.

Kelme provides a solid alternative with its 360 Men’s Michelin Leather Mesh Inset Soccer Shoes. These shoes run larger in size than most of its competitors allowing more people to wear them with ease, particularly those with wider feet. What makes these pairs so worthwhile however is how they use tire rubber technology and implement it directly into their soles. This is a game-changing difference when compared to other indoor shoe options. Because the surface resistance has been modeled after the same materials used for cars, the traction is unbelievably sound and unique. The longevity of the shoe also benefits from the tire components for how effectively they resist erosion. The bottom surface of Kelme 360’s can grip the ground so fluently that it promotes endurance and flexibility in its user. The 360 undoubtedly offers the best value you can get for your dollar.

A member of our review group switched to Kelme’s from average market shoes and could immediately tell the difference in his first session with his university’s indoor sports group. He even got asked the name of the shoes afterwards by some friends who also noticed the difference in his quick movements and overall control of the feet.

Everyone who’s ever participated in any high paced indoor sports (from badminton to indoor soccer, you name it) knows how important it is to be able to fully trust in your shoes in the most hectic situations. The Michelin rubber on the sole will give you the confidence and being as lightweight as they are you will forget in no time that you are even wearing shoes – they feel more like having a natural extension with a remarkable friction on the bottom of your feet.

Of course a discussion of indoor soccer shoes would not be complete without mentioning Nike. Nike’s Davinho line is for players looking to enhance their overall capabilities. With a synthetic leather upper and grippy rubber outsole, the Davinho is breathable and impressive. Black and white colors of the shoe and the customary emblazoned swoosh contribute to the familiar feel Nike has in all of their creations. The Davinho’s sole has a more flowing pattern than the Kelme and Adidas, and the start and stop functionality is of great benefit to its wearers. Under $100 retail in most locations, the Nike Davinho is a solid choice for your feet in you happen to be on a budget.

Not only do the synthetic leather air vents help with “airconditioning” the shoe but they also add to the feel of control on the ball when operating on the outside of your foot. They also help adding some curve to your shots. This may sound like a cheap gimmick but our test group was convinced about it’s positive effects – but keep in mind, none of us kicks like Pirlo.

Just like the Sambas the Nike Davinho has a very eye-pleasing design and can be used in everyday use also. Being lightweight and really comfortable I can definitely understand why you would choose them instead of a regular outdoors sneaker.

Another model to consider are the indoor versions of the classic Nike Mercurial (click to view on Amazon).

Deciding on which pair are the best indoor soccer shoes for you depends on whether you care the most about look, durability, or reliability. The Adidas Samba and Kelme 360 Michelin designs are very efficient in combining grip with ingenuity. Nike is a more universal shoe, but noteworthy because of the brands’ stellar reputation. While all three combine numerous features with a sleek appearance, the best overall shoe are the Sambas, with their thousands of positive reviews leading its charge. The Adidas Samba are not just intelligently constructed, but give the most back to an athlete using them as a springboard for their talent. The best type of shoe is one that showcases what the wearer can do better with them on than off. The Adidas Samba is a timeless classic for both the motivated indoor soccer players and the lads on the terraces.

Any cookies that may not be particularly necessary for the website to function and is used specifically to collect user personal data via analytics, ads, other embedded contents are termed as non-necessary cookies. It is mandatory to procure user consent prior to running these cookies on your website.